Croatian Man (voiced by Devin Clark) is a recurring character on Ugly Americans. He makes his debut in the pilot episode. His real name Goren is displayed on the score board in the bowling tournament in "Attack of Mark's Clone", and Mark Lilly calls him Goren a few times in "Any Given Workday".

He came from Croatia and attends Mark's class in the Department of Social Services. He is often referred simply as "Croatian Man". He works as a Candy striper in the hospital and has a terrible sense of humor.

He is friends with Doug and Martin. He mentions he has a wife in "Trolling for Terror".

Croatian Man appears in nearly every episode in the series. The episodes listed below are where he plays a more active role in the story. 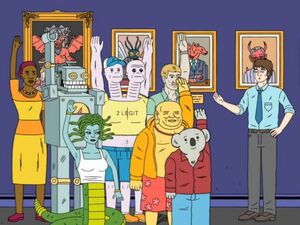 At a tour to Hell
Add a photo to this gallery

Retrieved from "https://uglyamericans.fandom.com/wiki/Croatian_Man?oldid=10685"
Community content is available under CC-BY-SA unless otherwise noted.